The International Edible Book Festival is an annual event held on or around April 1, which is also known as Edible Book Day. The global event has been celebrated since 2000 in various parts of the world, where “edible books” are created, displayed, and small events are held. The creations are photographed and then consumed. Regular contributors to the oficial site are groups from Australia, Brazil, India, Italy, Japan, Luxembourg, Mexico, Morocco, The Netherlands, Russia, and Hong Kong. The event was initiated by Judith A. Hoffberg and Béatrice Coron in 2000.

The official website http://www.books2eat.com/ says that the International Edible Book Festival is held to commemorate “the birthday of French gastronome Jean-Anthelme Brillat-Savarin (1755-1826), famous for his book Physiologie du goût, a witty meditation on food,” though April Fools’ Day is also related as “the perfect day to eat your words and play with them as the ‘books’ are consumed on the day of the event.The Participation rules per the official site are:

The event must be held on April 1 or around it

All edible books must be ‘bookish’ through the integration of text, literary inspiration or, quite simply, the form.”

Organizations or individual participants must register with the festival’s organization … and see to it that the event is immortalized on the international festival website ( http://www.books2eat.com/).

In 2005, the festival was a joint initiative of forum book art and the Museum of Work, Hamburg, where pastry chefs made edible books. The “book art” was displayed, photographed, and then eaten. In 2005, the event was celebrated in Los Angeles, too, at the Los Angeles Book Arts Center as the Annual International Edible Book High/Low Tea on April 2, where artists were encouraged to create and consume tomes. A 2006 Indianapolis Monthly described the Indianapolis festival as a “quirky event” held on April Fools’ Day, “celebrating both food and literature.” Participants created foods resembling literary titles.

Loganberry Books in Shaker Heights, Ohio has held an edible books festival every April since 2004. In 2013, awards were given for Most Literary, Most Appetizing, Most Book-like, and Most Creative.

A University of Florida library holds the event as the Edible Book Contest in April, in connection with National Library Week. There are two rules for the contest: Entries should be edible, and they must somehow relate to a book. Besides edible books, other entries include “edible book trucks” and “edible bookmarks”. The event kicks off with viewing of the entries, each of which has an information card describing the book title, author, and creator of the book art. The “books” are judged by a panel of judges and by public voting. Awards are given in categories like: Most Creative, Least Edible, Best Overall Fiction, Best Overall Non-Fiction, and Best Children’s Book.[9] In 2010, the event is planned to be held on April 15 and the award categories are: Best Overall Entry, Best Book Theme, Best Pun, Best Adult Book, and Best Children’s Book.

One library in the USA celebrated Banned Books Week 2008 by holding an Edible Book contest. The event invited guests to consume cooked dishes and baked goods that resembled covers of banned books or reflected their content. A reporter sums up the aptly named event: “Our celebration took Sir Francis Bacon’s famous words quite literally: ‘Some books are to be tasted, others to be swallowed, and the other few to be chewed and digested.'”

In 2011, the British newspaper Metro ran a story that they would begin producing the newspaper on an edible “Sweet tasting paper” claiming to bring customers “news in the best possible taste”. The newspaper later clarified this was nothing more than an April Fools’ joke.

1 April is the fortuitous collision of April Fool’s Day and the birthday of Jean Anthelme Brillat-Savarin (https://www.bookofdaystales.com/brillat-savarin/), brilliant and witty food writer who had enormous influence in the 18th century. 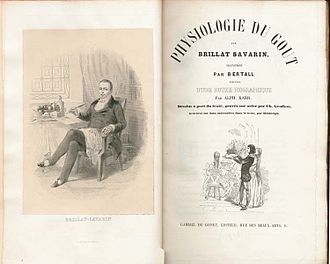 Here’s a little gallery to inspire you:

My name is Juan Alejandro Forrest de Sloper. Daily I post an anniversary with a suitable recipe du jour. Although the anniversary material is often really prominent, try to remember that, first and foremost, this is a FOOD BLOG.

Please note that if you are more comfortable in a language other than English there is a Google translate app in this sidebar.

Jump to a monthly archive